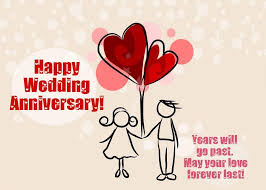 It doesn't matter where we're at or what we have, as long as I have you by my side, I'll be happy with that. Here's to wishing us many more happy years together.

Even from the start, I knew you were the perfect one for me. Wishing us a very wonderful happy anniversary.

May you continue to be a wonderful husband and wife to each other. Wishing you nothing but happiness, love, and joy in the years ahead.

The bond of a marriage can take various forms, depending on whether life is imitating calm or storms. Sometimes in can be a beautiful knot, sometimes it can be a fragile cord. Regardless of what it is, I hope your lives overflow with bliss. Happy anniversary.

Your dreams, ambitions and hopes for the future may not be always the same. But the beauty of your marriage is that you both live to make each others’ dreams come true. Happy anniversary to a perfect couple.

The first few years of marriage are likely to be the best. It is only later that life becomes a test. But the love between you both makes you better that the rest. Happy anniversary and good luck.

Even amidst difficult times, tough situations and harsh circumstances, you have proved that a happy
marriage can sail you through any storm of life. Happy anniversary.